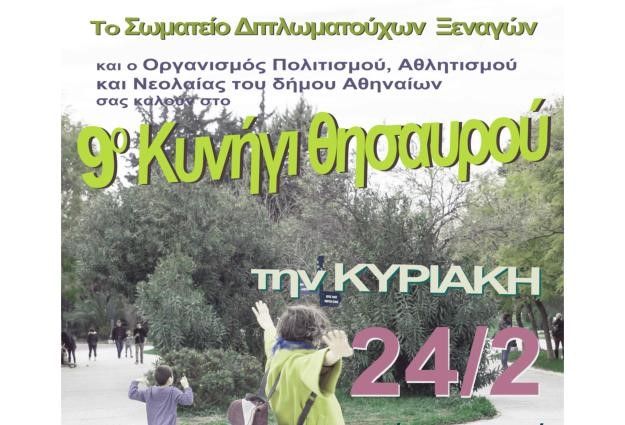 The goal of the event was to emphasize on the many cultures and the different national backgrounds that we encounter in our city, by offering free guided tours in the historical center.

The guided tours were followed by a celebrational event and reception offered to all participants in Warehouse C at the Thessaloniki Port.

The Athens Tourist Guide Association is organising on Sunday 24th February for the 9th year in a row the "Treasure Hunt" for the public.

The hunt is an already well-established initiative for the locals to get to know the museums and sites of Athens, conducted by the qualified tourist guides in Athens every year, on the event of the International Tourist Guide Day, under the auspices of the Municipality of Athens and the Greek Ministry of Tourism.

This year the National Archaeological Museum, the Epigraphic Museum and the area of the Field of Mars park (Pedion tou Areos) will be included in the hunt.
At the end of the "Treasure Hunt" free guided tours are offered to all successful participants, while the kids receive a certificate of participation and a small souvenir present.

The qualified tourist guides of the Argolis region in the Peloponnese, Greece are offering free guided tours to the public to celebrate the International Tourust Guide Day 2019.

The guided tours will be on the weekend of 23rd February at the Nafplion old town historical center, at the ancient Mycenae site and at the Palamidi castle and on the 24th February in ancient Tiryns and ancient Epidaurus sites.

The Western Greece Union of qualified tourist guides is offering on the 21st and 22nd February on Corfu island free guided tours to the local schools, celebrating the International Tourist Guide Day.

The tours will be conducted at the Corfu Archaeological Museum, at the Museum of Asian Arts, at the Post-Byzantine Icon Museum of Antivouniotissa and at the Achilleion Palace, all in Corfu city.

ONCE is an organization caring for the blind people in Spain. In its 81 years of existence has built up a system of social benefits for the blind and visually impaired that has no equivalent anywhere else in the world.

A government decree endorsement granted them the right to exploit the so-called “pro-blind” coupón or raffle ticket, so as to provide its members a decent life. The first raffle draw was held on 8 May 1939.

Everyday kindness of Spanish society provides the essential financial support to this institution, which Spaniards claim as their own. By purchasing this Coupón and other games of chance sold by the ONCE, the Spaniards make its existence possible. ONCE, through its Foundation, allocates part of its proceeds to other groups of disabled people in Spain. Every daily ticket has a particular design.

CEFAPIT celebrates the International Tourist Guide Day 2019 with its own ONCE coupón!

5.5 million tickets will be sold and will show our logo, the photo of an official guide by promoting our profession all through Spain with the motto :

This is what was done on the ITGD in some cities in Spain :

Lanzarote and Fuerteventura: The Apits of Lanzarote and Fuerteventura celebrated the International Guide’s day by paying an homage to the Cesar’s Manrique Foundations. In the celebrations of the century of the artist’s birthday we awarded the excellent relationship of the Foundation with the Official Guides. The institution was the fourth being distinguished with the CEFAPIT excellence distinction.

This year Madrid has celebrated the ITGD with a special dinner with members of the organisations that gave us different awards this year, and with several tours free of charge, in solidarity and for the benefit of a charity fundation like the Messenger of Peace Foundation. And several interviews. This year the slogan was : « I practise Tourismfilia… and you ? », which has proven to be an absolute success throughout the whole country.

Tenerife: Ous Association has invited to an oficial act in the island’s Governmental Palace to the President and the Councillor of Tourism of the government of Tenerife, the Vicecouncillor of Tourism of the Canary Government and several authorities and representavies of the tourism sector in Tenerife. This year the Association has honored the Autonumous Organism of Museums and Centers of Tenerife presenting a conmemorative plaque to express gratefulness for their cooperation with tourist guides.

Murcia: ASGUIMUR Licensed Guides Association in the Region of Murcia celebrated ITGD 2019 with 2 special guided tours in Murcia City and Cartagena on Saturday 23rd of February. Local and regional media (TV, press...) offered extensive coverage of both events. The Murcia City tour focused on some of the most traditional city districts "Quarters with charm", meanwhile the Cartagena tour explored gorgeous art noveau palaces spotted through the old town. The doors of many of them were opened just for our guests. Visitors who joined the tours were asked to give a donation for ASTEAMUR, Autism Association in the Region of Murcia. Members of this Association were very active in promoting the tours as well as in making tourist guides more visible to the society. The importance of hiring a licensed guide was highlighted by our members at the beginnig of each tour, as well as this year's motto in Spain #Turismofilia.

Segovia: The Association professional guides of tourism of Segovia celebrated the day of the guide with a training day . We visited one of the most important museums of the city, the Artillery Academy of Segovia ,founded on the 16th of May 1764, is the oldest active military academy of the world. The Alcazar of Segovia was the headquarters of the Royal College of artillery, since its founding in 1764 until the fire of March 6, 1862, when it moved to the convent of San Francisco of Segovia. We visited as well the XV th century Gothic- Elizabethan cloister preserved, the important and large library with 50.000 books since XVI, XVII, XVIII, XIX y XX centuries about sciences and artillery and the fantastic collection of minerals and rocks with more than 3400 elements

AUSTRIAGUIDES are celebrating the International Tourist Guide Day already this weekend. Yesterday about 100 visitors with visual impairments were guided at the Dome Museum in Vienna. The museum team provided many tactile objects, among them an original gargoyle from the Cathedral roof :)

The main event will take place tomorrow, Sunday 17 February, in and around the Hofburg, the former Imperial Residence, with about 150 AUSTRIAGUIDES guiding in 5 different museums. We are all very excited and looking forward to the big day!

News from our French FNGIC colleagues:

Our Hungary colleagues’ news by MIe:

Kinga Tittel, a tourist guide and member of MIe association, wrote and published the book “Beautiful Budapest”, which was presented to the public in Budapest by MIe on International Tourist Guide Day 2018

Νews from our Ukrainian colleagues:

On February 21th the Ukraine Tourist Guide Association will hold a conference with the Ukrainian tour operators.

On this day they decided to talk about their successes, problems and prospects.

In Slovenia our ARGOS Tourist Guide member-association celebrated properly: in more than 30 places around Slovenia more than 40 guided tours! Locals had a chance to meet us and get familiar with the beauties of their home towns- not bad for a nation of 2 million people, don't you think so? Great media cover as well!

The President and Executive Committee of FEG